A Taste of Unitarian Universalism 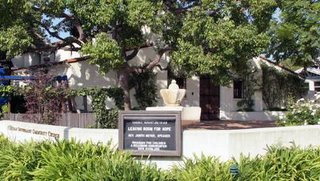 In Episode 32 of Six Feet Under, Nate and Lisa go camping with another couple and the other couple tells them about this chruch they go to that is for anyone of any religion, including athiests. The religion they practice - if you could call it a religion - is Unitarian Universalism.

I'm not religious, and I've often felt that by not being part of a religious community, I am denied the increased social capital that comes with being part of such a community. That sentiment along with a curiosity for what an inter-faith church was like led me and my wife to attend a service this morning at the The Unitarian Universalist Community Church of Santa Monica.

It was an interesting experience. It was held in a room that looked like a traditional Christian church with a low center stage, multiple rows of pews, and a center aisle. The left wall had religious symbols of all the major religions. There was a piano and organ that sounded like a traditional church organ. The service began with some classical music performed by the pianist and a talented young oboe player. Then the minister welcomed everyone and explained that their congregation welcomes people of all faiths, races, national origins, and sexual preferences. It sounded like a statement about the groups you can't discriminate against when renting out an apartment :).

The topic of the service was "What We Grieve". There was some group singing, some more instrumental music, and an announcement of the joys and sorrows that individuals of the congregations experienced recently. One woman shared her feelings about her recent loss of her husband to cancer. There was also a 4-minute moment of silence to remember lost loved ones. During the silence, the whole room could hear the snoring of an older man Norm that was seated next to us. I found that entertaining.

Another part of the service involved the reading of a story called The Mustard Seed during which all the children went to the stage and gathered around the minister. After that, the children left the room to attend some kind of religious exploration class while their parents stayed behind for some more music and a reading from the book The Year of Magical Thinking by Joan Didion.

Like I said, it was an interesting experience, and I think I share all the UU values (which seem similar to basic Humanism), but I'm not sure if I'll ever go back. Despite not one mention of God or any overly religious practices, the whole thing felt - I don't know - almost a little creepy or cultish. It definitely felt like going to church. I have a feeling this kind of thing really appeals to people who were raised with religion, don't buy into their religion, but want to have that whole church-going experience in their adult lives to feel good about themselves. That sounds kind of sarcastic, but I don't mean it to be. I think it is a good thing for people.

After the service, we went to the Urth Cafe on Main St. for breakfast and coffee. That place was totally packed - we could barely get a table. I don't know if I'll go back there either because the food and coffee weren't much better than other places, and it wasn't very relaxing since there were people eyeing our table so they could snatch it right as we got up to leave.

Overall, it was a nice to do something a little different this Sunday morning.
Posted by Ken Weiner at 11:47 AM