A few months ago, the sales and marketing part of my company got to spend the day at Catalina Island for "team building". This week, the tech part of the company, which I'm in, got to go on our own team building field trip. We went to Ultrazone in Sherman Oaks to play Laser Tag!

This was my first time playing laser tag and I had no idea what to expect. The way it works is that everyone gets divided up into small teams of about 5 people per team. 3 teams or 15 people play at a time. Everyone wears a vest with several light-up targets and a laser gun. The object is to point the last gun at other people's targets and if the laser hits the target, you earn points and the other person's gun gets disabled for a few seconds. You also score points by attacking an opponent's "base" which is a room with a special target that requires a few seconds of repeated shooting before it gets "hit". When it gets hit, a strobe light comes on. It was pretty fun, but not something I'd enjoy doing more than about once a year.

After laser tag, we were all given free tokens to play video games, etc. I spent all mine on Dance Dance Revolution which is a lot of fun and verey tiring. I played 3 times against 3 other people and beat all of them!

I would have much preferred to go to Catalina, but still had fun playing Laser Tag for the first time.
Posted by Ken Weiner at 1:41 AM No comments:

Daryl Hannah has been making short videos that she releases weekly on her website http://www.dhlovelife.com/. They seem to be about a lot of the things that interest me like bike riding, farmers markets, and caring for the environment. The latest movie (might be at this url after this week) is about bicycle culture and has many scenes from Los Angeles and its Critical Mass rides. I guess she went on one of the recent rides.

Maybe I'll see Daryl some day on one of the Santa Monica Critical Mass rides!
Posted by Ken Weiner at 8:54 PM 1 comment:

My plan of commuting to work by bicycle began today. I decided I should try biking to work everyday to prepare for an upcoming bike vacation in late September. I have always thought about biking to work since it is less than 5 miles away from home.

I hesitated because I didn't want to get to work all sweaty. Most of the ride is flat, but there is one long hill as I pass the Santa Monica Airport on Walgrove Ave. It is hard to get up that hill without breaking a sweat. To address this, I joined the gym that is in the office complex I work in. They have nice showers with towel service. It is great to be able to shower and not have to carry a wet towel around afterwards. As an added bonus, I might add a short workout to my morning. The gym membership will set me back $55 a month, but I can save $58 a month if I stop purchasing the EZ transit pass. I'll just keep a debit card handy for the few times I may take the bus instead of riding.

There are a few things I am thinking about buying to help with the commute. First is a new bike. I have a mountain bike and a beach cruiser, but I think it would be a lot nicer to have a bike with skinny tires for road riding. Perhaps I'll get a hybrid bike. I also want to get some panniers to carry my clothes and occasionally a laptop or notebook.

There is plenty to read about concerning bike commuting:

We attended the LA Tofu Festival yesterday in Little Tokyo. It was hot and crowded and there was a lot of good food to eat. My wife and I split 20 festival script tickets which cost $1 each. They can be traded at each booth for small portions of food, most of them consisting at least partly of tofu. There was tofu pizza, tofu skewers, tofu tostadas, tofu with noodles, tofu desserts, etc. etc.. The items ranged from 1 to 3 tickets, with most of them being 2. This is a little cheaper than I remember the food being (I went to the festival a few years ago). We got more than enough tickets. We were totally full with 4 tickets each to spare. We spent the remaining 4 on bottled water and a boba drink.

I wish we could have spent more time there and in Little Tokyo in general. However we were kind of in a rush because we had to get home to pick up friends to go to Cinespia. Last night's movie was the original Psycho.

Here is a blurry picture of me at the festival entrance taken with my cell phone: 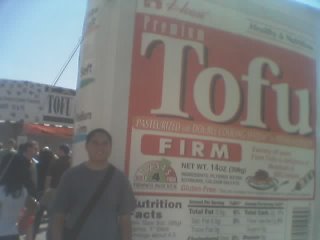 This morning was the very first Mar Vista Farmers Market. It is going to be held every Sunday from 9 AM to 1 PM on Grand View Blvd just south of Venice Blvd. Like other farmers markets, they had stands selling organically grown produce. Vendors were also selling Mexican food, crepes, and desserts. The desserts were sold by the two woman who run Hotcakes Bakes, the French bakery around the corner from me.

I went to the farmers market just after finishing breakfast with some friends at Pepe's Galley, an old-school diner within the Mar Vista Lanes bowling ally. I got there just as Bill Rosendahl was presenting a $100,000 check to the Mar Vista Community Council which would go toward beautifying Venice Blvd. I'm glad to see some effort put into making the Mar Vista "main street" a little bit nicer. I think it has a lot of potential.

While leaving the farmers market, a guy from Soaptopia, a soap vendor on Venice Blvd., handed us a free soap sample. We decided to walk down to Soaptopia to see what else they sold. There was a sign inside the store saying that all their stuff was made locally in their kitchen in Venice, California. I asked the guy behind the counter where their kitchen in Venice was. He said, "right here in this store". It is amazing how many people have no idea where they are in LA. This store was clearly in Mar Vista and not in Venice. For some reason I refrained from correcting the guy as I normally would. I was hoping my apparent confusion would be a hint for him.
Posted by Ken Weiner at 1:24 PM No comments:

Tonight's Santa Monica Critical Mass was one of the best I've been on. For some reason, more people showed up tonight than ever before. Maybe it was the fact that the weather has been perfect recently. It usually gets cold at night on the west side of LA, but recently it has been nice and warm. It is so nice to ride the streets of LA with hundreds of other cyclists. The streets feel so much safer that way.

Tonight's ride went through many of the usual favorite areas such as Main St., Abbott Kinney, the Venice Canals, and the Venice Circle. For the first time, though, the ride headed east on Rose Ave to preview the new bike lane that has been striped between Lincoln and Walgrove. It is so great to see new bike lanes showing up on the west side. It makes a big difference for cyclists in my opinion.

Usually I don't like when people bring loud sound systems on the ride, but tonight, it was okay since they played some mellow music that seemed to put everyone in a good mood. In fact, when some car drivers got frustrated with us, most of us just waved at them. It was such a better reaction than some times in the past where cyclists yelled back at the drivers.

The ride ended at an outdoor party at 10th and Michigan in Santa Monica. It was held in someone's mostly empty yard and there was plenty of tamales and beer.

My wife came on the ride tonight - her very first critical mass ride. She had a great time and was lucky to have chosen one of the largest rides as her first one. While some old-school funk music was playing from someone's bike stereo, she told me that she felt like we were in some kind of Quentin Tarantino bike gang.

Here is a picture from last month's ride. I am in there riding with a friend of mine. Can you find me?
Posted by Ken Weiner at 11:05 PM No comments:

Yesterday I received a belated birthday gift from my parents-in-law. It was something I've been wanting for over a year: a kitchen compost pail, some odor-blocking filters, and 100 biodegradable compost pail lining bags.

This new pail will replace a small ceramic jar we've been using that tends to get pretty gross if you don't wash it all the time. The new pail has holes in the top to let air in, and a slot to place filters in to make sure no odor gets out. It's also bigger which means I won't have to empty it as often. The new bags are made out of cornstarch and are really cool. I will no longer have to carry the whole pail out to the compost bin. When the pail fills up, all I have to do is take the filled bag out and throw the whole thing in the compost bin.
Posted by Ken Weiner at 9:48 PM No comments: