Tonight we went to see Mike Stern and his quartet at Catalina Bar & Grill which featured Dennis Chambers, Bob Franceschini and Victor Wooten. I saw Mike Stern's group 15 years ago in Santa Monica when he was playing with the late Bob Berg. They were amazing then, and are still amazing now.

Tonight was the last show of his 6-day stint in Los Angeles and the club was totally packed with enthusiastic fans. I had no idea so many people in Los Angeles would show up for this show. It was great to see since often, amazingly talented and famous jazz musicians pass through LA and are greeted by embarrassingly small audiences. I guess Mike Stern appeals to both jazz and rock fans.

This was the first time I saw Victor Wooten and Bob Franceschini live. Wooten, of Bela Fleck and the Flecktones fame, was practically the highlight of the night. During one of his solos, he played inspiring renditions of The Christmas Song and Go Tell It On The Mountain. Franceschini was good, but in my opinion, he didn't compare to other sax players that I've heard Mike Stern with like Bob Berg and Michael Brecker.

I haven't seen many good jazz shows in recent years, so it was great to finally make it out and see some of the best musicians in the world.

Posted by Ken Weiner at 1:28 AM No comments:

A buddy of mine at work just told me about Nerdcore, which is basically people rapping about technical stuff. Most of the rapping isn't that great musically, but it is pretty funny for us computer geeks. Check out this example Monzy performs at Stanford University and this short documentary about Nerdcore itself: Nerdcore For Life Trailer.
Posted by Ken Weiner at 1:20 PM No comments:

Email ThisBlogThis!Share to TwitterShare to FacebookShare to Pinterest
Labels: nerdcore

This evening I attended the Los Angeles Java Users Group. The topic was Blu-ray and BD-J, a platform for providing interactive content with movies on Blu-ray discs. Several engineers from Panasonic made the presentation, as they are developing Blu-ray products. They also authored the Blu-ray content on The League of Extraordinary Gentlemen, one of the first Blu-ray offerings.

The technology looks interesting and is just starting to break into the market. It occurred to me that it may be a good time to learn BD-J and start a company based on BD-J development while the technology is so new. I talked to one of the Panasonic developers after the meeting, though, and she told me that the spec isn't that "open". There is no way right now to download the spec or some kind of development platform and get familiar with it without joining the Blu-ray Disc Association (which I think costs a lot of money). Granted, I haven't really looked into it that much. Maybe it is easier than she led me to believe.
Posted by Ken Weiner at 12:16 AM 1 comment:

This morning, I went to go jam with some friends from work at a music studio they rent on Cotner in West LA. After our jam, one of them had a craving for a pastrami sandwich at Langer's Deli near MacArthur Park. That area is known to be a pretty dangerous area with lots of crime and drug deals, although I suspected is had been improving lately as with the rest of Los Angeles. Eager to try a new restaurant and see MacArthur park for the first time, I agreed to make the trek out there for lunch. My friend raved about how Langer's was by far the best deli in LA, especially for a pastrami sandwich. 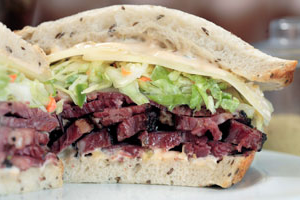 I have to admit, the food was pretty good. I was told to get
#19 - PASTRAMI, SWISS CHEESE and COLE SLAW Russian Style Dressing $11.25. I have been slacking on my effort to be vegetarian and today I slacked again and ordered #19 as my friend recommended. I have to admit, it was pretty darn good. In addition, I ordered matzo ball soup and we shared an order of potato pancakes which came with apple sauce and sour cream. It was all very good. 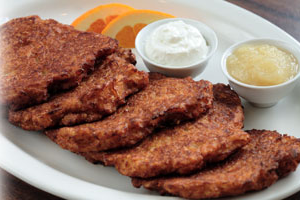 Our waitress, Eveline, was a 69-year-old charming woman with an accent that sounded Scottish. For my friend who recommended Langer's, chatting with her was half the reason he liked to go there. She delivered great service with a smile.

After lunch, we decided to walk off our big meal at MacArthur park which was across the street. The park was lively with people strolling, resting, and, of course, peddling fake ID's and who knows what else. We got approached by at least 2 men asking if we needed any fake ID's. I guess if you need a fake ID, this park is the place to go!

It was really a beautiful day in LA since it had rained during the last week. It was one of those warm sunny fall days on which you can see all the surrounding mountains, landmarks like the Hollywood sign, and the shiny buildings downtown. It was a perfect day to visit MacArthur park for the first time. 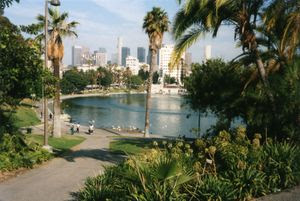