It's been almost 5 years since my last post about the corner lots of Washington and Centinela which are supposedly destined for redevelopment. That's because pretty much nothing has happened on those lots - until this past week.

All of the sudden a 8-foot tall white wooden ampersand appeared in the middle of the lot on the north east corner.  I had no idea what it meant, but I was really happy to see it.  To me it meant that someone out there is thinking about this vacant plot of land. 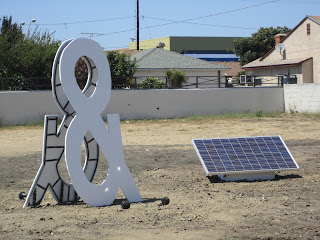 A little Googling produced an answer.  The mysterious ampersand is a public project by Los Angeles-based artist Shannon Ebner.  According to the LAXART web site


The ampersand is a conjoiner; it signals an incomplete thought and acknowledges that there is more to be said.

This is part of a Shannon Ebner exhibition at the Hammer Museum which started July 16, 2011.  Apparently this isn't the first time she's used an ampersand in her work.  See this photo from a year ago in Milan.

I've been waiting for the redevelopment on this corner to get underway since I moved to this Del Rey neighborhood 11 years ago.  I really hope, as the giant ampersand acknowledges, that there is more to be said...
Posted by Ken Weiner at 9:53 PM 3 comments: