For more than a year now, we've been wanting to remodel our master bathroom. I only call it a master bathroom because it is closest to our bedroom. Otherwise it is a pretty modest bathroom that was built in the 70's by the owners before us as part of an addition to the original house.

Here are the reasons we want to remodel:
We first approached this remodel like we did our kitchen remodel which we did successfully a few years ago. We got an estimate on cabinets from a local kitchen store and then got a quote from a contractor that the store referred us to. The estimate was $7500. All we had to do was select and order all the parts, e.g. tile, mirrors, faucets, toilet, etc. and this guy would come and install everything. The problem is that we suck at picking out parts. We went to a few stores and couldn't really decide on what we wanted. We kind of forgot about the bathroom for a while.

Then a few months ago, our interest in the bathroom returned since it is so hard to clean. We decided that it might be worth paying more for someone to design and manage the whole thing since we are usually busy at work and can't be home to manage contractors. While shopping at the Great Indoors, we found that they offered such a service. We began the process with them which included a designer and a project manager that came to our house to talk it over with us and take measurements. For some reason, it took them several weeks to get the designs final and we grew frustrated. It didn't help that their quote was over $22,000. That was more than we wanted to spend. We ended up not following through.

Since then I've called two other contractors to get quotes. One I found as spam in my email box and the other I found in the local paper. The first one told me on the phone that the cost would be $30,000 to $80,000 depending on how nice I wanted it. I quickly told the guy that it was above my budget. The other person came to my house to do an estimate. This morning, he came back to explain his proposal and to give me his quote which was around $30,000. I don't get it. Why does it cost $30,000 to do a modest bathroom remodel?

My parents and even some neighbors have told me that it should cost around $6000-$7500. I would feel stupid if I spent $30,000 and then found out later that I really could have had the same work done for much less. We didn't even spend $15,000 to remodel our kitchen.

So as of now, I don't know what I'll be doing. It may be a long time before we get the bathroom remodel we want.
Posted by Ken Weiner at 7:58 PM 1 comment: 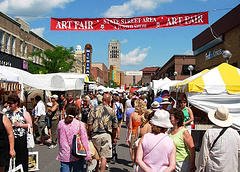 We just got back from a 4 day trip to Ann Arbor, MI to visit some good friends and to check out the annual Art Fair. We stayed at our friends' house in a quiet neighborhood between Almendinger Park and the University of Michigan football stadium.

We spent most of Day 1 and Day 2 walking around the streets of downtown Ann Arbor looking at Art Fair art. Most of the art was photography, paintings, and sculptures from artists that came from all over the country. In addition to art, there were quite a few politically-oriented booths, most of which were left-leaning. Impeach Bush! signs were all over the place and many of them could also be found in people's yards. I didn't see a single conservative or Republican booth or sign. Maybe this explains why I've always liked Ann Arbor :)

After the Art Fair, we took our friends' dog for a walk along the Huron River at Nichols Arboretum commonly called The Arb. The Arb is one of the most scenic places in Ann Arbor and I make sure to go there at least once every time I'm in town.

On Day 3 we took a day trip to Lake Michigan and spent time at the beaches near Grand Haven. We also did some hiking in the Sand Dune parks adjacent to the beach and finished off with an ice cream treat at Whippy Dip. It was a fun day.

On Day 4 we ate at the famous deli Zingerman's and then cruised around town looking at real estate. Most of the houses were selling for between $250-300K. I, of course, couldn't help but think that the smart thing to do would be to sell our house in CA and move to a place like Ann Arbor where we could practically retire since the housing prices are so much cheaper.

When we got back to LA, we learned that the weather here was pretty awful while we were gone. Ironically, it had been hot and humid here, while the weather was almost perfect in Michigan.
Posted by Ken Weiner at 9:32 PM No comments:

I installed Gentoo Linux on my desktop at work over a year ago because I wanted to learn Linux and a co-worker recommended Gentoo since it requires you to learn a lot of lower-level configuration and doesn't have as much hand-holding as other distributions. It also uses Portage as its package management system which installs most things from source code, allowing you to heavily customize software according to your environment. Portage also is supposed to make the management of dependencies easy. With my co-worker by my side, it has been pretty easy to maintain, since if I ran into a problem, he would help me out.

Well my Gentoo-expert co-worker has recently left and I am now all alone with Gentoo. I have been able to survive okay until just a few days ago when I tried to update my X windows (xorg-x11 package) installation from version 6.8 to 7.0. I followed Gentoo's wiki page on performing the upgrade, but afterwards, my system won't boot into X. I am totally stuck. It complains about not finding some nvidia driver module.

Now I don't know if I should spend time trying to fix it by experimentation and posting on the Gentoo forums, or if I should say screw it and reinstall another Linux distribution like Ubuntu that is easier to maintain. So far 2 other people at work have been using Ubuntu and have had no problems. I have to decide soon because, without being able to bring up X, I won't be able to use the tools I need for work such as Eclipse, OpenOffice, and Evolution.

I have a feeling I will end up starting over from Ubuntu. I may even go into work this evening (Sunday), install Ubuntu, and try to get my development environment ready for tomorrow.
Posted by Ken Weiner at 11:48 AM 2 comments: