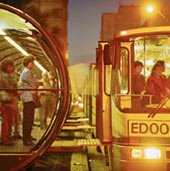 Today I read an interesting article in a recent Sierra Club Magazine about the implementation of Bus Rapid Transit, BRT, in Curitiba, a city in Brazil. BRT seems like an excellent alternative to subways and light rail which are much more expensive.

The idea is to give buses their own dedicated lanes in the centers of major streets and to make sure they stop less frequently, about every third of a mile instead of every block. Special ramps can also be installed to make boarding much easier and quicker.

A city like Los Angeles which has many long and wide streets should be able to implement systems like this.

On Christmas Eve, my family all went out for Boba Tea at Boba Loca and then to find a nearby Geocache called Don't Pressure Me. There were 6 of us, and none of us were able to find the cache within about 30 minutes of searching. The day after Christmas, 4 of us decided to try another. My mother found the cache within 5 minutes and was totally excited. Encouraged by our find, we decided to go back to Don't Pressure Me and give it another shot. We found the Don't Pressure Me cache, again within 5 minutes. It was a really clever hide - the cache was inside an old pressure guage. After 2 quick successful finds, my parents were all wound up about Geocaching, and so we set out to find one last one, Mc Kid's Little Bambino. I never would have guessed that my parents would be so excited about Geocaching. We couldn't find Mc Kid's Little Bambino, but my parents didn't want to give up. They searched for almost an hour! I think I know what to get them for Christmas next year.

Here are my current stats on Geocaching.com:

The Chronic of Narnia on SNL

Did you see the last episode of Saturday Night Live? Chris Parnell and Andy Samberg teamed up for a hilarious rap video. I always liked when Chris Parnell rapped during guest spots on the SNL News. The video is available on the internet in case you missed it. I heard it is available on iTunes too. I hope those guys make more of these videos.

On a side note, what's up with Andy Samberg's name? Every time I hear it, it sounds like Adam Sandler.
Posted by Ken Weiner at 10:31 PM No comments:

Earlier this week I attended ApacheCon US 2005 in San Diego. There were two days of presentations on various open source Apache projects. It was cool to see, and in come cases meet, the core developers of these projects, especially the projects I have contributed to such as MyFaces. It helps a lot to put faces to email addresses.

One treat I got at the conference was the chance to try riding a Segway for the first time. The company LogicBlaze sponsored Segway training and tours for conference attendees as a way to market their services. A group of us got to take the Segways for a 2 mile ride along the San Diego Bay! We also got to take it "off roading" on a large patch of grass. I pushed its limits a little bit by rocking back and forth and ended up flipping over the handlebars! Luckily I had a helmet on and didn't get hurt. It was a lot of fun, but I can't see ever buying a Segway which costs around $5000.
Posted by Ken Weiner at 10:21 PM No comments:

I am thrilled to see that Google is working on a new service called Google Transit Trip Planner which is kind of like the familiar "Driving Directions", but for public transit riders. This Google Blog post, Public Transit Via Google, talks about how Google's policy of letting employees work on whatever they're interested in 20% of the time led to this innovation. I sure hope this service gets implemented in Los Angeles where we have so many transit systems, i.e. Metro buses, Metro light rail, Santa Monica Big Blue Bus, Culver City Bus, etc. Now, if we could only outfit the buses and trains with GPS and have them report their locations to Google...
Posted by Ken Weiner at 12:18 AM 3 comments:

Have you ever seen the show Stella on Comedy Central? I saw one episode a few months ago and got hooked instantly. I think it is the type of show you will either love or hate, and I love it.

It is an offbeat comedy starring Michael Ian Black, Michael Showalter, and David Wain. It looks like it was only on for one season and a second season isn't going to happen for sure. If you have seen the show and like it, there is an online petition you can sign to encourage Comedy Central to pick up season 2. Here are some other web sites about Stella:

I have been studying for the final exam for a class I am taking at UCLA extension called Networking with TCP/IP. This is my first UCLA extension course. I have definitely enjoyed it. I transitioned to the field of software development without having had a formal education in Computer Science, so I never had the opportunity to learn some low-level things like networking until now. I think everyone who works with or is interested in computers and/or the Internet should take this class. It totally cleared up most of the questions I had about how the Internet works.

It started with the basics about the different kinds of physical connections like Ethernet and Wireless and the function of hubs, bridges, and switches. It then moved into the Internet Protocol (IP) and how addressing and routing work. Next came the Transmission Control Protocol (TCP) with details about sockets, connection establishment and termination, and achieving reliability. We covered User Datagram Protocol (UDP) and why it is appropriate for multimedia applications and ended with application-level protocols such as FTP, HTTP, and DNS. Along the way we also learned how to use basic networking tools like ping, tracert/traceroute, netstat, tcpdump, ipconfig/ifconfig, Ethereal, and nmap.

I think I am going to sign up for another extension class next quarter - maybe something on using Linux...
Posted by Ken Weiner at 10:19 PM No comments: