A friend at work pointed out these YouTube videos to me a few days ago.

The world could use more Linux users like her :)

I wish Novell would put these on TV! 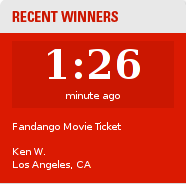 Just a few minutes ago, I won a free movie ticket on Blingo, a Google-powered search engine that gives away prizes to people who use their site to search the web. I signed up for this site a few years ago, and when it was new, it was pretty easy to win.

When someone wins, the person who originally referred them to Blingo wins the same prize. Between April 2005 and 2006, I won 6 times - 4 of the 6 resulting from when someone I referred won. All 6 times, the prize has been a free movie ticket. I have never won an iPod or something more valuable. 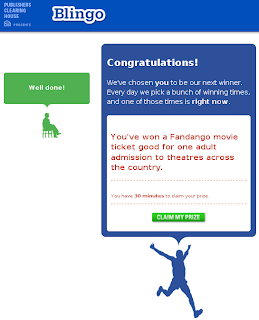 Until just now - my 7th win, I hadn't won anything for over a year. I was beginning to think that Blingo had made the odds of winning so tough that I was never going to win again. I guess I was wrong. I will continue to use Blingo since the search results are exactly the same as Google and there is that slight chance of winning something.

Do me a favor: If you decide to sign up for Blingo, please use this link which has a code in it so I will win when you win!
Posted by Ken Weiner at 11:10 PM No comments:

The most recent episode (#29) of the Fresh Ubuntu podcast introduced me to the Vibez MP3 Player which supports the Linux operating system as well as the open Ogg Vorbis audio format.

I kind of wish I had one of these instead of my iPod Nano. Use of the iPod requires iTunes which doesn't run on Linux. Also, the iPod won't play music in the ogg vorbis format. The day my iPod stops working, I will probably buy one of these Vibez players - unless, of course, there are better alternatives for Linux by then.

A few weeks ago, I saw some people pouring cement in the middle of the lot. I thought that maybe they were finally going to start constructing whatever is going to be built at the corner of Washington and Centinela. The new cement rectangle sat there for a few days and then, to my disappointment, on top of the cement they placed some ugly machinery that was hooked up to a bunch of tubes leading to holes in the ground. Around the cement rectangle, they placed a chain link fence. 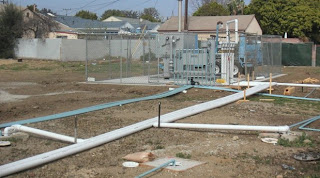 I suppose this is all to either measure the levels of chemicals in the ground or to actually clean up whatever is in the ground. I hope this phase doesn't last long since it is ugly and I'm anxious to see what is going to be built on this corner. This neighborhood could really use a nice restaurant, cafe, gym, or bar.
Posted by Ken Weiner at 9:00 PM 1 comment:

I had never seen Kurt Elling live before. I have one of his albums, The Messenger

. I also have the Charlie Hunter album Songs from the Analog Playground

that has Elling on two tracks: Desert Way and Close Your Eyes.

It was a great show. I really like Elling's voice. His pitch and timing are near perfect and he really swings. His set last night featured many styles of music. My favorite was "Soul Food" which was a politically incorrect humorous swingin' duet between Elling and bassist Amster. It was reminiscent of Jon Hendricks, another one of my favorite jazz singers.

Another thing I liked about the show was that not everyone soloed on every song and solos were kept short enough to hold the interest of the audience. This kept the set flowing nicely.
Posted by Ken Weiner at 6:12 PM No comments:

I just finished up doing my taxes for 2006. This was the 10th year in a row that I've used TurboTax to file my federal and state tax forms. I actually use their online version of the software each year. It works in a standard web browser like Firefox so there is no need to install anything. It saves your information on their servers so you don't have to re-enter stuff that doesn't change each year.

Each year, TurboTax offers a discount if you enter via Fidelity.com's Tax Center. I used TurboTax Deluxe which ended up costing just under $50 for filing federal and state forms.

This year was the first year I've used TurboTax on Linux. I was worried at first because when I first signed in, TurboTax displayed a page with the warning

Your operating system and/or Web browser do not meet the TurboTax Online system requirements.

Intuit supports Firefox on Windows and Mac OS X, but not Firefox on Linux. I continued anyway despite their warning that I should have "upgraded" my operating system or browser:

If you continue without upgrading, we may not be able to assist you with any issues you might encounter.

It turned out that I had absolutely NO problems using TurboTax online with Ubuntu Linux 6.10 and Firefox 2.0. They might as well just support it.

This year I am getting a federal refund, but I owe twice as much state tax. For some reason, not enough state tax is taken out of my paychecks. I still need to figure out why.
Posted by Ken Weiner at 11:46 PM No comments:

I went on my 5th consecutive Los Angeles Bike Tour this morning. I woke up at 3:50 AM, picked up a friend at 4:15 AM and then met 2 more friends at 4:30 PM in order to get to USC for the 5:50 AM start time. I tried to park in my normal spot on King Blvd just east of the 110 freeway, but there was no parking allowed there this time because the route changed this year and the first part of the ride was along King. I ended up paying $10 to park in a lot. 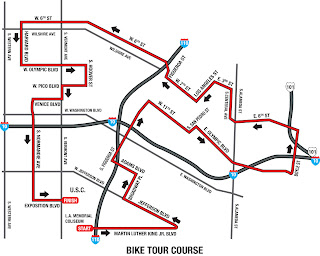 I was really happy they changed the route this year. It was an opportunity to see new Los Angeles neighborhoods. The ride started and ended at USC again, but the majority of the ride was east of downtown this time. We rode as far as Boyle Heights and took in some awesome views of the downtown skyline as we crossed the LA River coming back west. Riding within downtown was also nice. A lot of downtown reminds me of New York. 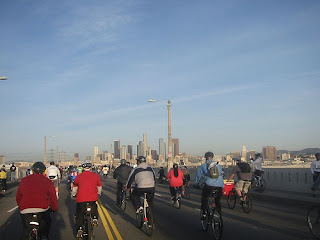 The new route flowed a lot better this year. There were very few narrow streets which ended up being bottle necks in years past. That being said, there seemed to be more accidents this year. I saw at least 5 cyclists on the ground getting help from security. I also saw one road biker whose front wheel got stuck in a narrow rut in the street. 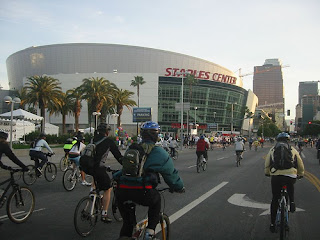 Every year, I'm amazed at how many people show up for the ride. It is rumored to be the biggest organized bike ride in the USA at about 15,000 cyclists. It is one of the few events that brings the people of LA together for a day. 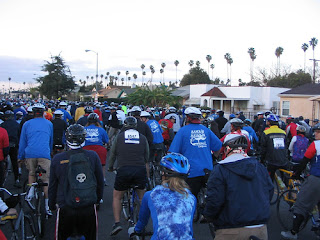 We finished the ride at 8 AM and then picked up our medal, water, gatorade, fresh apples, and cookies that were being handed out in front of the Natural History Museum. Finally, we headed back near home to have some coffee and bagels at the Rumor Mill.
Posted by Ken Weiner at 10:21 PM 1 comment: