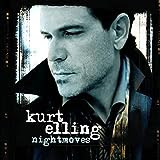 I had never seen Kurt Elling live before. I have one of his albums, The Messenger

. I also have the Charlie Hunter album Songs from the Analog Playground

that has Elling on two tracks: Desert Way and Close Your Eyes.

It was a great show. I really like Elling's voice. His pitch and timing are near perfect and he really swings. His set last night featured many styles of music. My favorite was "Soul Food" which was a politically incorrect humorous swingin' duet between Elling and bassist Amster. It was reminiscent of Jon Hendricks, another one of my favorite jazz singers.

Another thing I liked about the show was that not everyone soloed on every song and solos were kept short enough to hold the interest of the audience. This kept the set flowing nicely.
Posted by Ken Weiner at 6:12 PM