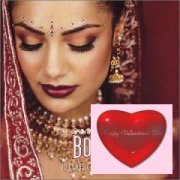 Instead of trying to get a reservation at a restaurant tonight, my wife and I decided to plan a quiet evening together at home. I don't know exactly how it ended up this way, but the night had sort of an Indian theme. I cooked one of our favorite meals, Aloo Gobi, which is a combination of potatoes and cauliflower in a yellow curry. During dinner, we put on The Best of Bollywood CD.

I've made the Aloo Gobi at least 3 times before. I got the recipe by watching the Who Wants to Cook Aloo Gobi featurette on the Bend It Like Beckham DVD in which the director, Gurinder Chadha, gives a cooking lesson while her mother and auntie criticize her as she prepares and cooks the food. I found it really funny. Anyway, I wrote down all the ingredients and took notes on all her cooking tips. It comes out delicious and smells great every time. I can get all the ingredients at my local India Sweets & Spices grocery store in Culver City. Here is the recipe if you're interested:

Making the Curry Sauce
Heat half a cup of vegetable oil in a large saucepan
Add the chopped onion and one tablespoon of cumin seeds to the oil
Stir together and cook until onions become creamy, golden and translucent
Add chopped coriander stalks, two teaspoons of turmeric and two teaspoons of salt
Add paprika for color (optional)
Add chopped chilies (according to taste)
Stir grated tomatoes into the onion mixture
Add ginger, garlic and mix thoroughly

From Sauce to Aloo Gobi
Add potatoes and cauliflower to the sauce plus a few tablespoons of water (ensuring that the mixture doesn't stick to the saucepan)
Ensure that the potatoes and cauliflower are coated with the curry sauce
Cover and allow to simmer for twenty minutes (or until potatoes are cooked)
Add two teaspoons of Garam Masala and stir
Sprinkle chopped coriander leaves on top of the curry
Turn off the heat, cover and leave for as long as possible before serving