Best and Worst of American Idol 2006 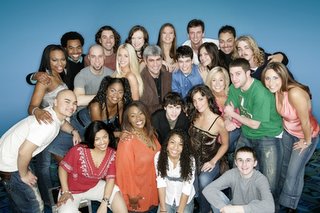 After hearing the 24 finalists of this year's American Idol, I have chosen my most favorite and least favorite contestants of the girls and the boys:

I think Paris and Taylor have the most talent and genuine love for music. They each have a full voice, great intonation, and are the most original and musical as far as phrasing goes. I'd like to see those two go to the finals.

That being said, Paris is young and may be a little too energetic and cute to the point of being annoying. I couldn't stand watching American Idol's Diana DeGarmo for that reason. I don't know if Taylor has the right image to get himself enough votes from the viewers. America might find him a little too eccentric.

Brenna is just plain annoying. I think each year they pick someone like her on purpose just to annoy us. Her equivalent from last year is Mikalah Gordon. Bobby was just bad. I can't believe he made it this far. There had to be many other male contestants who were better than him.
Posted by Ken Weiner at 10:30 PM

I watched this show for the first time on Tuesday when the girls were singing. It was like watching karaoke for an hour. My favorite was the first woman from Antioch, TN (about 10 min south of Nashville). Wow.. some of them really sucked. It was pretty easy to see who made it onto the show because they were attractive and who actually had talent.

I guess it didn't really interest me because last night I forgot about it and didn't tune in to watch the men. I liked the Taylor guy too, they showed a bit of his audition.