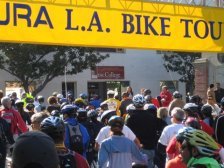 This morning, we got up at 4 AM to ride our 4th consecutive annual Los Angeles Bike Tour. The tour is supposedly the most popular bike event in the world. It starts on the USC campus at 6 AM and follows the same path as the LA Marathon which starts at 8 AM. It is a chance for thousands of cyclists in LA to ride together on the street for over 20 miles with absolutely no cars.

I went with my wife and two friends from work. We were all able to last the whole ride despite not having trained at all. The route which reaches as far west as La Cienega is mostly flat, so almost anyone can do it. In fact, people of all ages ride it.

Usually at the starting line, they blast the song I Love LA from the loudspeakers while a woman addresses the bikers saying things like Good morning LA! Isn't it a beautiful day today? What a great morning to be in Los Angeles! It always chokes me up a little because there are few events where thousands of people in our city come together. This year, though, they played different music - I don't know what it was - and the same woman was there, but she wasn't speaking to the cyclists. Bummer. A change that I did like this year was that as we passed Leimert Park and turned onto Crenshaw Blvd, they were blasting some upbeat big band jazz.

After the ride, we went to a another co-worker's house for a special treat. He and his wife cooked us a delicious lunch of authentic South Indian food. Very spicy. Good stuff.
Posted by Ken Weiner at 10:15 PM