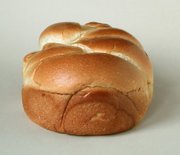 On my way to the bus stop each weekday morning last year, I was able to grab coffee and a muffin at the Westside Village Bakery on the west side of Centinela Ave just south of Washington Blvd. I was really bummed when I found out that it closed in late December of last year. It stayed empty for a while and finally, about a week ago, another bakery opened up in its place.

The new bakery is called Hotcakes Bakes and serves French and American food. It is owned and operated by two young women: one named Katrina that lives nearby, and the other a chef from Paris whose name escapes me. Both of them are very nice and seem excited about their new business. I am excited too because I have a place to get coffee and a small breakfast again on the way to work. So far, I've been ordering croissants or brioches.

I wish Hotcakes Bakes the best of luck. I'm going to try to promote them within my neighborhood in hopes of helping them stay in business.
Posted by Ken Weiner at 1:11 AM