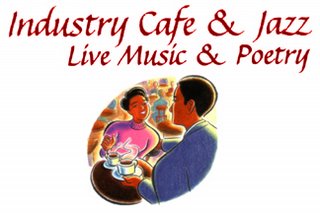 I was browsing LAJazz.com earlier today to see who was playing in LA tonight. I came across a jazz club I hadn't heard of before called Industry Cafe & Jazz which is on Washington Blvd in Culver City a little bit east of the Jazz Bakery. The description said they had jazz music, Ethiopian food, and no cover. I decided to check it out.

The band this evening was called M.v.A. Quartet. I'm not sure what it stands for. They were a pretty good jazz quartet consisting of drums, bass, guitar, and keyboards. They pretty much stuck to standards you'd find in the Real Book. My only complaint was that the keyboardist was playing a keyboard and not a real piano. I think the music would have sounded much better with a real piano. Also, the keyboardist and guitarist were playing pretty loud, especially for a small room. This, of course, led to the drummer and bass player playing loud as well. When two guest singers sat in, they were each drowned out by the band. I wish bands like this would just go completely acoustic and listen to each other more.

The food was pretty good too. We first ordered a vegetarian plate and a non-vegetarian plate, but then our server relayed a message from the chef saying that we ordered way too much food. He said he would cut both plates in half and serve it to us on smaller plates. He was right. We had plenty of food even with the smaller portions. After dinner, we shared a yummy Tiramisu.

I asked our server how long the place has been there. She said 6 months. She went on to tell me that they are fortunate that another Eritrean restaurant located down the street had recently closed which was good for their business. I had never heard of Eritrea before, so I asked her to repeat what she had said. I thought I was at an Ethiopian restaurant. "We're all from Eritrea" she said referring to the staff and most of the clientele. I apologized for my ignorance and asked her what Eritrea was. She explained that in the early 90's the people of Eritrea, a province in Ethiopia, won a civil war and gained independence and sovereignty. I felt lame for not knowing about the country of Eritrea, but then again, how many American's do? Eritrea and the rest of Ethiopia have similar cuisine it turns out, so what we ate is still considered Ethiopian food.

I really like this place, so I'll definitely be going back soon. On Wednesday nights, they have a jazz jam session, which is probably what I'll check out next. If the musicians are near my level, I may break out the sax after several years and bring it down there. I kind of miss playing. We'll see.
Posted by Ken Weiner at 11:59 PM

I didn't know about this country either, and I have a pretty good grasp of geography. Eritrea became a country in 1993, years after I studied where all the countries in the world are.

Eritrea got all of the coastline from Ethiopia. Bummer for Ethiopia... no ports.

Hi Ken!
I was searching about eritreans and thier way of life in the US that's why i came across your articl "Eritrean Food and Jazz" thanks for your article.

Sulle, you're very welcome. Thanks for visiting.