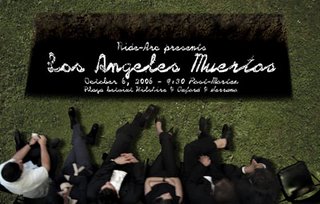 I went on my first full RIDE-Arc ride last night which was called Los Angeles Muertos. Starting at Wilshire and Western at 9:30 PM, we rode to various creepy parts of LA. Starting with an old crematory where some famous people were cremated (I can't remember who - they were famous long ago), we rode to the Angelus Rosedale cemetery which was built in the 1800s. There were a few famous people buried there, but the only one that meant anything to me was jazz pianist Art Tatum. We were given about 2o minutes to explore the cemetery grounds by bike.

I was really hoping we'd go to the house featured in Six Feet Under since it is in the same West Adams neighborhood. Instead we went north and rode to the Hollywood Forever cemetery. Again, we were given about 30 minutes to explore. I had been to this cemetery many times at night, believe it or not, for Cinespia movie screenings. Still is was fun to explore the whole thing by bike.

After that, we rode west on Hollywood Blvd, turned right up to the Magic Castle, stopped at a house where the Black Dahlia murder allegedly took place, and finally over to the Church of Scientology to end the ride. Jill was craving a doughnut so we stopped at Winchell's on the way home. We didn't get home until 2 AM.
Posted by Ken Weiner at 8:57 PM

Was the donut good? Surprisingly, Nashville suffers from a lack of good donuts. We had a garage sale, and I got donuts from the local donut place and they were LOUSY. Krispy Kreme was much better. At least I tried to support the local economy. However, I'd have been happier with my decision if the donuts were better.