Yesterday we went to this year's Del Rey Day, a community event sponsored by the Del Rey Neighborhood Council. I appreciate the council's effort to build a sense of community with an event like this, but it doesn't seem to be working. Every year there appears to be less people attending the event. It always feels like the only people there are the ones who had something to do with planning the event itself.

Del Rey suffers from a lack of identity. Few people in Del Rey would be able to tell you there is such a thing as Del Rey, let alone the fact that they live or work there. It really is an adjacent to community. It is the part that is left over after defining the boundaries of Marina Del Rey, Mar Vista, Culver City, and Playa Vista. There is no part of Del Rey that feels like the center of the community. Few, if any, real estate agents use the term Del Rey when advertising properties. If you tell someone you live in Del Rey, they will try to correct you and say "You mean Marina Del Rey? Playa Del Rey?". If you tell a cab driver at LAX to take you to Del Rey, they will give you a blank stare.

This year they held the Del Rey Neighborhood Council officer elections at the Marina Del Rey Middle School to coincide with Del Rey Day. That was a good idea. They were able to muster up 137 voters according to the preliminary results. I think this was more voters than they've had in the past. Almost all the officer seats up for grabs had only one candidate to choose from which didn't make for a very exciting election. The only contested seat was for 2nd Vice President which was won by write-in candidate Katia D'Amico by a narrow margin. Katia told me that she ran at the last minute because she was concerned that there would otherwise be no Latino representation on the board for an area with quite a large Latino population. 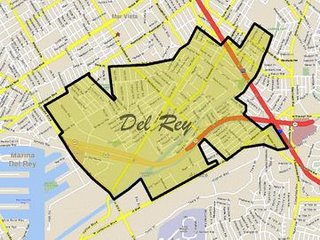