Green at The Palmer Room 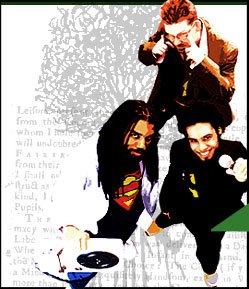 I checked out the open mic night called Green this evening at The Palmer Room in Palms. It was hosted by Ratpack Slim, DJ Jedi, and Joshua Silverstein. They do it every Monday apparently. I had seen the Palmer Room advertised in some LA jazz newspapers before, but this is the first time I've made it out there. It is a pretty nice room not too far from where I live with a laid back vibe, no cover charge, and good food.

A lot of the same poets I saw at Highways were in the audience tonight. Usually open mic nights are filled with performers that have no talent, but Green seems to be the exception. Tonight's Green show along with the recent shows at Highways has given me a feel for the LA poetry scene and I am happy that I know about it now. I plan to go back to The Palmer Room again, hopefully bringing new people next time. I also hope to go there for some jazz too. I need to figure out when someone good is playing there next.
Posted by Ken Weiner at 11:28 PM