Kings for a Night

Last night we saw the LA Kings at the Staples Center VIP-style! My company owns one of the VIP suites and occasionally hands tickets out to the employees. I am not really much of a hockey fan, but I had never been to the Staples Center and I didn't want to pass up the chance to go for free and on top of that, to visit a VIP suite. It was really cool. The VIP suite is kind of like a small hotel room, but where there would normally be a sliding glass door to a balcony, there were 2 rows of leather seats overlooking the inside of the Staples Center. The room also had a couch, a sink, and some refrigerators which were stocked with soft drinks, juice, wine, and beer. 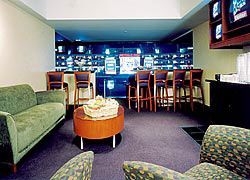 The hockey game was pretty entertaining. The crowd really goes crazy when the home team scores a goal. The players fight a lot without getting reprimanded by the referees which I think is kind of lame, but I guess that's what a lot of people go to the games to see. To me, it is a little WWF in that respect.
Posted by Ken Weiner at 7:55 PM