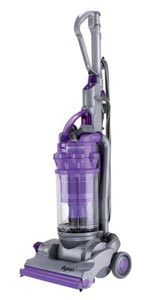 I have managed to rack up hundreds of dollars woth of cashback bonuses with DiscoverCard. Like many other credit cards, you get awarded 1% of your purchases. As an added bonus, you can double that if you exchange the bonus money for gift cards from merchants that are partners with DiscoverCard. Whenever I need to buy something expensive, I look to see if I can get it with these gift reward cards.

Recently I was in the market to buy a vacuum, so of course I went to DiscoverCard.com to find out if they had any partner merchants that could sell me one. The only partner was SharperImage which carried a Dyson vacuum, one of the fanciest, but most reputable vacuums out there. It is one of those vacuums that is never supposed to lose suction and doesn't use any bags. The bottom of the canister just drops open so you can empty the dirt and dust into a trash can. There is a model called DC14 Animal which seemed like a good choice considering I have a dog that leaves pet hair lying around. The only thing was that this vaccum costs $549!!! I rationalized that it would be a good idea to buy this vacuum because since I could get it at half price using gift cards from DiscoverCard. The maximum SharperImage gift card amount was $80 so I ordered 6 of them, which I could combine with some old SharperImage gift cards I already had, to purchase the vacuum.

I couldn't believe this, but when the gift cards arrived, I saw these words printed on the front in bold letters:

Limit one card per transaction.

My whole plan was ruined! I was now stuck with $480 worth of SharperImage credit that couldn't be returned. I went to SharperImage, hoping that the sales person would give me a break if I explained my predicament. Unfortunately, he didn't. He said I could only use one of the gift cards towards the purchase of the vacuum. I asked what would happen if I bought something with one card, returned it to get store credit, then bought something else, returned it, and so on until I accumulated $480 worth of store credit with which I could buy the vacuum. He smiled and said that he wouldn't let me do that, but admitted that nothing was stopping me from visiting the store 6 times, getting different sales people each time, and pulling off this idea.

I decided that going to the store, which is half an hour from my house, 6 times just to get a vacuum wasn't worth it. I went to Plan B: Buy the darn vacuum with one gift card and sell the rest on eBay, hoping to get close to $80-worth for each card. So that's what I did. One of my cards is on eBay right now and already has 3 bids. I will sell off the rest, one each week, so there aren't too many for sale at one time.

Anyway, this has been pretty frustrating, but the vacuum is awesome. I love being able to see the dirt in the see-though canister as I vacuum. I should never have to buy another vacuum the rest of my life now.
Posted by Ken Weiner at 8:41 PM

That is so cool and not cool at the same time. As far as the vacuum goes, that is cool, and I have a vacuum like that too. (However, it is made by Bissell and not Dyson) It sucks, and you can see all of the sucked stuff in the cannister. Pretty neat. If I'm lucky, all of he stuff swirls around like a tornado and that is fun to watch.

Actually, I am very into floor care. I also have a steam cleaner (also by Bissell.. I liked the vacuum so much I decided to stay with the brand). So far there hasn't been a spot the steam cleaner can't handle.

I haven't heard of Bissell. I like watching the swirling dust too. What got you into floor care?

Buying new carpeting for my house got me into floor care. I bought a really light carpeting, and it gets dirty easily. You should see all the schmutz that comes up in the steam cleaner! It still doesn't look brand new (it's 3 years old now) but it really looks a lot better after I started cleaning it properly...