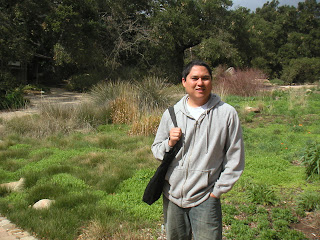 I had the day off today and decided to take a trip to Santa Barbara to visit the Santa Barbara Botanic Garden which is dedicated to California native plants.

We got up early and made it to Maxwell's just in time for its half price omelettes which they serve until 7 AM. I got the Garbage omelette.

By 8 AM, we were on the road to Santa Barbara. It was raining for most of the trip, but the skies cleared just as we arrived at the gardens. The weather was almost perfect for the rest of the day - just a little chilly at times.

We arrived at about 9:30 AM. The botanic gardens were awesome! Almost all the native plants I was interested in were on display. The garden was divided up into sections like the meadow, the dessert, and the woodlands. There were also sections showcasing plant families like ceanothus and manzanita.

We spend the first 3 hours walking around and saw almost all of the gardens. We then took a break for lunch at The Daily Grind near the Santa Barbara Mission. After lunch, we returned to the gardens for a walk through the Ceanothus Section. This was one of my favorite sections as it showcased many of the plants that I planted in my garden at home, e.g. California Buckwheat, White Sage, and California Poppy.

At 2 PM we went on a guided tour which was led by a nice old lady from Washington who fell in love with California natives and settled in Santa Barbara. The tour lasted about an hour. It was okay, but nothing special. The guide basically took us through a few sections and pointed out a few of her favorite plants.

Before leaving, I stopped by the gift shop and nursery and purchased seeds for the Giant coreopsis and a 1 gallon Monkeyflower to replace one that I planted a few months ago that didn't survive. The Giant coreopsis was a very peculiar looking plant that reminded me of something you'd see in a Dr. Seuss movie. I thought it would be fun to plant somewhere in my yard. 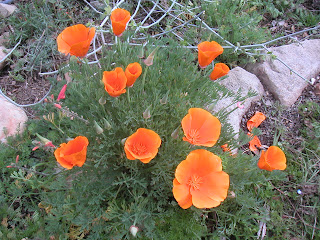 A few California Poppies were in bloom today, but I plan to go back to the Santa Barbara Botanic Gardens in the spring when many more wildflowers are in full bloom.
Posted by Ken Weiner at 10:09 PM

Santa Barbara Botanic Garden is nice but not more.backyard design